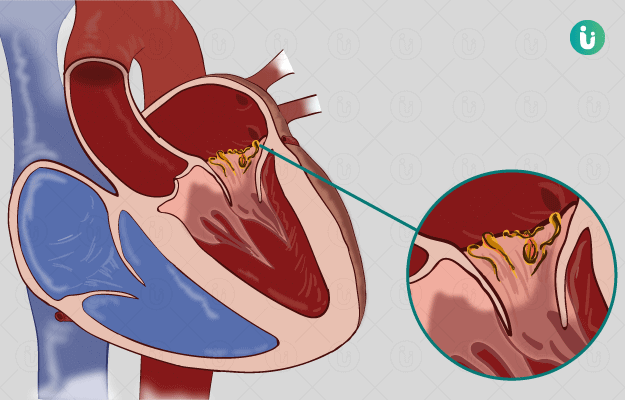 In rare cases, it may have a fungal origin. The heart’s four valves are the mitral, tricuspid, aortic, and pulmonary; These valves are in the innermost part of the heart, known as the endocardium (hence the name endocarditis). Their function is to allow the passage of blood in one direction only, and thanks to them, it is possible that blood can be pumped throughout the body.

Despite being a localized infection, endocarditis can affect various organs indirectly, as it sends microbes and emboli through the arteries.

Endocarditis can affect anyone, but it is much more common in people with previous heart disease. The prevalence of endocarditis is estimated at between 1.5 and 6 people out of 100,000 each year, and there are no significant variations between countries.

Men are affected by this disease more often than women (approximately 3-4 men for every woman). There seems to be no difference with age, except in children, in whom endocarditis is very rare.

This disease is one of the most frequent causes of Fever of Unknown Origin (FUO). It is usually diagnosed by internists and treated under intensive hospital surveillance.

The consequence of endocarditis and possible complications

Endocarditis is a medical problem that can lead to severe consequences, even death, if not treated properly. However, in recent decades, advances in cardiology imaging have allowed an early diagnosis and a much better prognosis. It can even be cured without significant sequelae being appreciated if treated in time and adequately.

Among its most common complications, we find the possibility of the infection spreading to other areas or organs of the body, the presentation of a brain abscess, or even the appearance of a stroke resulting from the detachment of small clots fragments of the brain. Infection that travels to the brain.

Beyond the time in which it is taken and the approach prescribed by the specialist, the patient’s prognosis will depend on the type of microorganism causing the infection, the size of the vegetations caused by said bacteria, and how the valve function is altered—affected in question and the possible existence of parallel problems in the heart, such as embolisms or heart failure.

One question that arises when determining the causes of endocarditis is that at first glance, it is strange how something as difficult to access as the heart valves can become infected. However, accessing them is not that complicated if we think that all the blood in the human body is collected in veins that flow into the heart. It is precisely by traveling through the blood that bacteria can reach the heart valves and infect them.

In any other infectious disease – pneumonia, urinary tract infections, meningitis, etc. – bacteria can pass into the blood, known as bacteremia. Even when we brush our teeth every day, we cause small bacteremia by passing bacteria into the blood through the gums’ blood capillaries.

Although bacteremia is frequent, endocarditis is not so frequent, and this is because only some people have factors that predispose them to develop endocarditis. The most important risk factors are:

In total, the bacterium that most frequently causes endocarditis is Staphylococcus aureus (golden staphylococcus, which is the bacterium that most often causes infections in humans). Second, and quite frequently, would be Streptococcus (greenish streptococcus) since it is part of the mouth’s bacterial flora. Other bacteria can cause endocarditis, but they are much less common; in rural areas, the disease known as Q fever due to contact with animals would stand out.

What To Consider When Choosing A Formula For Your Baby

admin - September 15, 2021 0
Smart companies must make decisions based on data and analytics, preventing intuitions and opinions from interfering in their direction. This idea is fundamental...

In what ways birthdays can be made more special?